Every once in a while, I get ambitious and want to try a new recipe. I pulled this Chicken Enchiladas recipe out of a magazine, but the night I tried to make it, I didn't have all the ingredients! I made a few substitutions (see below the recipe), and it turned out delicious. Yum! If you need your enchiladas to be gluten-free, make sure your corn tortillas and shredded cheese contain no gluten. 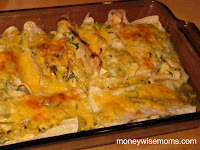 Heat over to 450 degrees. The recipe called for cooking the chicken in boiling water, then letting it cool and shredding it. I used leftover shredded chicken from a crockpot meal earlier in the week. 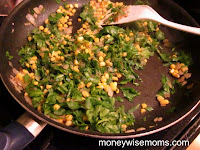 Heat the oil in a large skillet over medium heat. Add the onion and 1/4 tsp each salt and pepper; cook, stirring occasionally, until tender, 5-6 minutes. Add the corn and spinach and continue to saute. Stir in the sour cream, then fold in the shredded chicken, coriander, and 1/2 cup of the cheese.

Spread 1/2 cup of the salsa in an 9 x 13-in. baking dish. Prepare your tortillas (I tried using damp paper towels in the microwave, but it didn't work!). Roll the chicken mixture in the tortillas (about 1/2 cup per tortilla), and place seam-side down in the dish. Top with the remaining salsa and cheese. Bake until beginning to brown, 8-10 minutes.
The original recipe called for poblano or green peppers, but I didn't have any. I wanted some extra veggies, though, so I added the spinach, and it went over well with the whole family. I also didn't have fresh cilantro, so I just used dried coriander. And as for my failure with the rolled tortillas–my Facebook Friends gave me a lot of suggestions to try next time.

This was the first new recipe in a while where all five of us loved it. One of the girls gave me “18 thumbs up,” and although I doubled the recipe so we'd have leftovers, there weren't any!

This recipe is linked up to Gluten-Free Wednesdays at Gluten-Free Homemaker, Tasty Tuesdays at Balancing Beauty & Bedlam, the $5 Dinner Challenge, MomTrends Recipe Linkup, and Feasting in Fellowship Friday at Comfy in the Kitchen.