Off on another indoor winter adventure! This time, we went to a museum with FREE admission** in Washington DC: The National Building Museum. We'd been there before, maybe three years ago, but we were excited to visit again with our kids older and to see the Lego Architecture: Towering Ambition exhibit(open through September 5, 2011). It costs $5 per person for this exhibit, and you need to sign up at the Information Desk in the lobby. You'll receive a wristband and a time to arrive upstairs. While you're waiting… 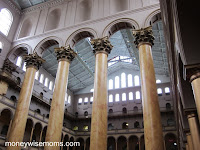 The National Building Museum's building (obviously) is incredible. The kids loved looking up at all the details in the Great Hall and guessing what materials each was made from. Several of the exhibits are just photos and text, which our kids didn't enjoy as much as we did. There are some hands-on activities scattered around, though; in Cityscapes Revealed, they practiced different ways to build with bricks and saw the museum's Architectural Toy Collection. In Washington: Symbol and City, they recognized major landmarks like the Washington Monument and Capitol Building among the huge 1901 model of the city. But we were there for the Lego: 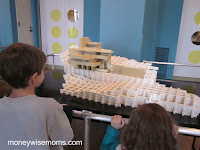 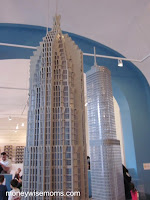 Skyscrapers were recreated in Lego, many of them from the Chicago area (which was a treat for me since I've either seen them or been inside those buildings from when I lived there). Some were over 6-feet-tall, and we really enjoyed seeing how Lego pieces were used in different ways to create architectural elements. Once you're done ooh-ing and aah-ing, you can head over to the brick-building part of the exhibit. 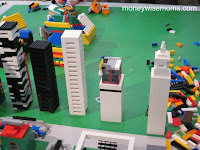 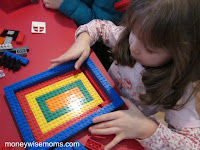 Picture it: thousands and thousands of pieces of Lego laid out on counters and tables of all heights, with all ages building and being creative. It was amazing! We saw dads building towers bigger than their kids, a boy who built a reasonable facsimile of the Washington Monument, and found pieces we'd never seen before–interesting windows, doors, slants, and more. We spent about an hour creating, with some of our buildings ending up in the Lego City being communally-created among the museum patrons.

We didn't go in because of the line, but the other favorite section of this museum is The Building Zone, a play area for ages 2-6 that has dress-up and tools for kids to be construction workers, a giant model of a real house, so they can see how electrical and plumbing work, and giant-sized blocks and construction toys for building. That's where we spent the majority of our time last time we visited.

Regarding logistics, there is metered parking all around the building, and the meters are not enforced on Sundays or holidays (making parking FREE). Home-packed snacks/lunches are fine, as evidenced by the many families eating picnic-style on the floor of the Great Hall. There's also a small cafe on the ground floor. There's also a donation collection box near the exit, so be sure to donate what you can to help keep this great museum FREE for all families.

**Since this originally posted in early 2011, there is now an ADMISSION charge to this museum. Get details.

[...] from DC each week this summer! In the meantime, see my posts on the National Aquarium in DC,  National Building Museum, and the Walters Art Museum. Filed Under: Frugal Fun, Kids, [...]