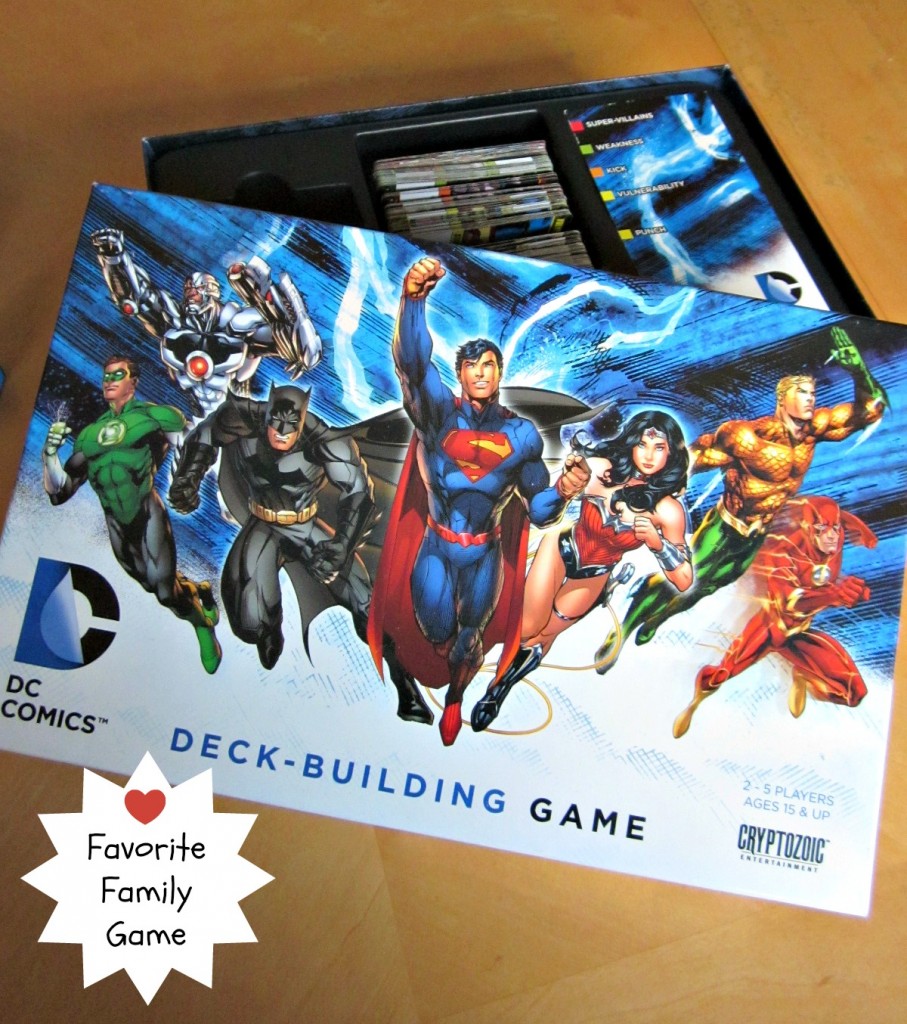 You don't need to have a superhero fan in the house to love the DC Comics Deck Building Game. It's a fantastic game for everyone in the family, and it's been our latest obsession for about a year now. I'm sharing it because so far, the families we've played with have all run out and bought it, they love it as much as we do. While the box says “Ages 15 and up,” my girls (age 8) have been playing it just fine. Their strategies are not quite as fine-tuned as the rest of us, but my son (age 10) and his friends LOVE this game and play it afterschool all the time. It's equally fun for adults as kids, which is always one of our criteria for naming a Favorite Family Game.

And this may seem silly–but it is greatly appreciated–the box comes with a nifty divider so you can sort the cards easily and store them for the next game. I like things like that! 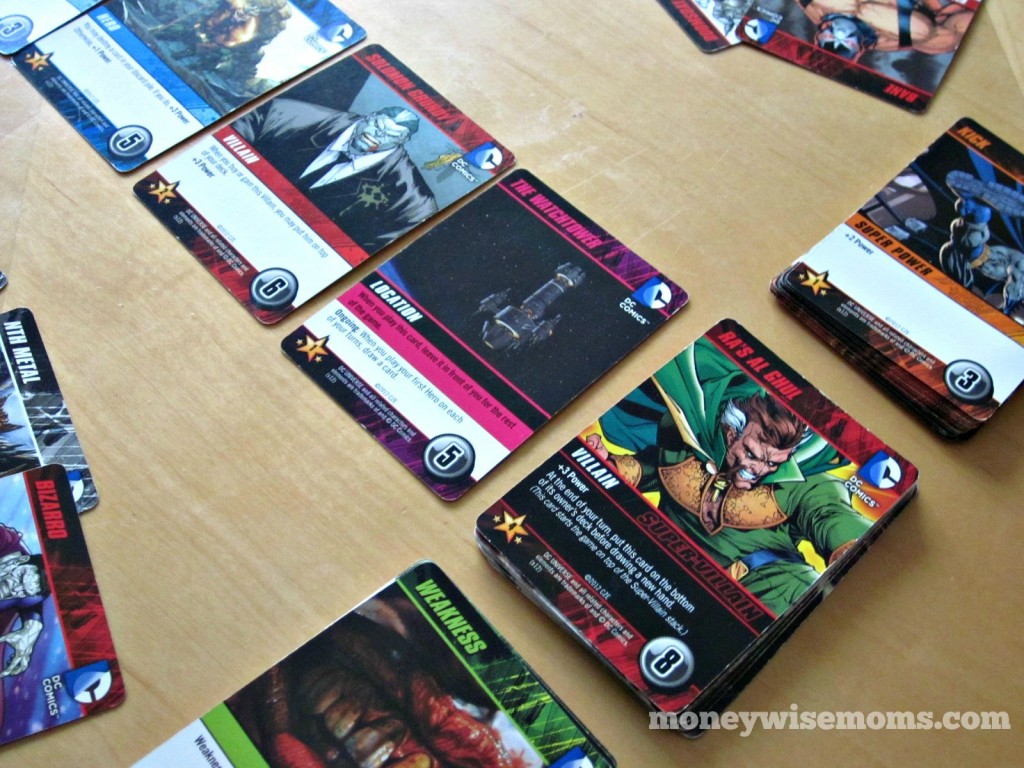 You start the game by choosing a hero randomly–Batman, Superman, Wonder Woman, Aquaman, The Flash, Green Lantern, or Cyborg–each has a special ability you'll use during your turns. Deal out a hand of five ability cards and lay five face-up in the middle of the table, making them available for purchase. Each turn, you use “power” as money to purchase more cards and build your deck. As the game goes on, you'll purchase higher-value cards and create a stronger deck, all the while fighting DC super villains like The Joker, Sinestro and Brainiac. Each super villain attacks all players when they're revealed, so there's a sense of co-operative play as you work together to defeat them, but ultimately the player who collects that card will get the points. When the last SuperVillain is defeated, each player counts up their victory points on the cards to determine the winner.

For a video on how to play, head to the Cryptozoic website.

If you've never tried a deck-building game before (another family favorite is Dominion), it's a strategy game type that takes a little getting used to, but it really gets you thinking. We like that the DC Deck Building Game plays differently every single time, so the kids (and we) have to think through how we'd play differently in the future. It's quite simple to learn–we've taught many of all ages now–and as with many of our favorite family games, this is a quick play (about 30 minutes) so you can try again right away if you'd like. It's also easier to keep the kids sitting and engaged with short games like this. 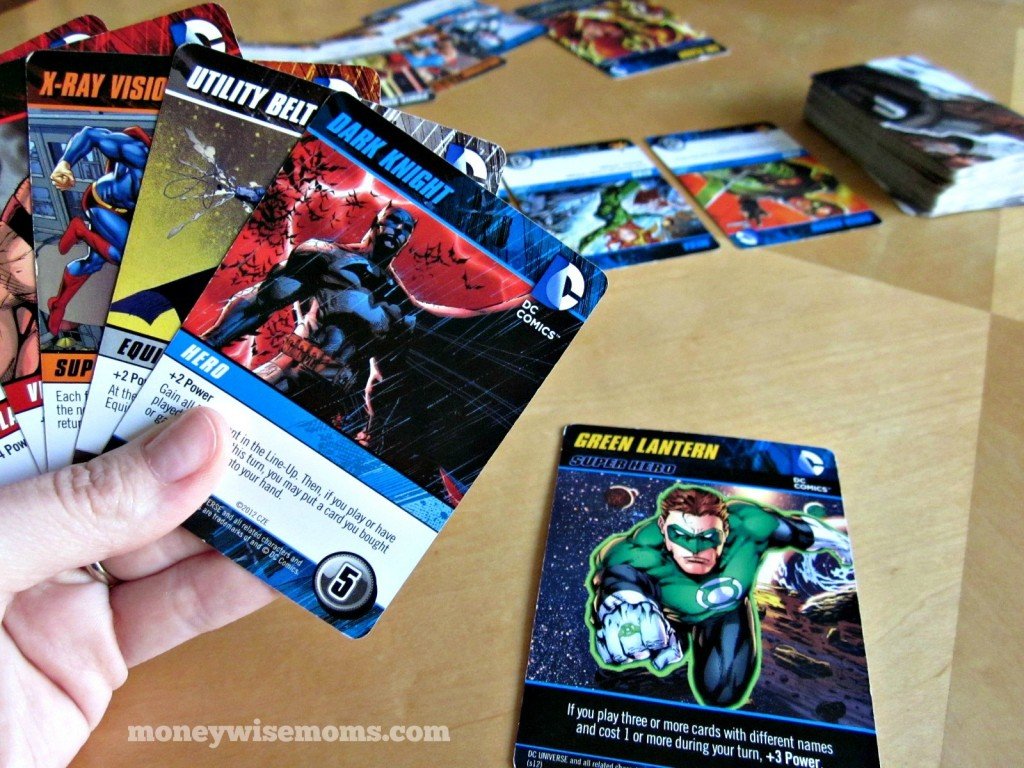 If you end up loving the game as much as we did, a new version came out this spring called Heroes Unite. It has a whole new set of heroes, villains and powers, and it can be played as a stand-alone game or you can combine the two for an epic battle.

You can buy the DC Deck Building Game at a local game/comic book store. Support your local small business! If you're shopping online, shop at the publisher's site Cryptozoic or last resort, head to Amazon.

Looking for more Favorite Family Games? I'm going to post more big-kid and adult games this year. In the meantime, read about:

[…] for more Favorite Family Games for big kids and adults? We also love the DC Deck Building Game and Sketch […]