I've bought chicken broth for years, used bouillon even. I never thought I was one of those people that would make it myself. Now, I find that many prepared chicken broth contain gluten, and I've never liked the amount of sodium. I found several versions online on how to make broth, and it's so easy. Now that I do it, it's hard to go back. Plus, I can hide all kinds of veggies in the broth (mostly from my husband, but it's good for all of us). 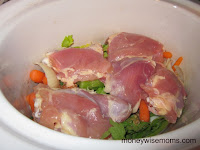 In the crockpot, layer the bone-in chicken along with celery, carrots and onions. I add 8 cups of water and some herbs (parsley, basil, oregano and garlic) to the crockpot. I let it cook 8-10 hours, and the house smells great. 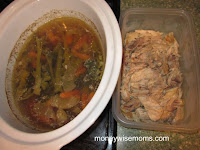 For the next step, I take the cooked chicken out with tongs and place in another bowl. It's easy to pick the meat off the bones (it falls off, really). You'll end up with about 4 cups of cooked chicken from 4 thighs. Then, I pull the crock out and let it cool a bit before the next step.

Pour the entire crock through a colander or strainer. You'll end up with a bowl of broth and a bunch of limp veggies.

With the broth, you need to let it cool, then set it in the fridge. Once it's chilled, it's easy to skim the fat off the top.

With the crock of veggies, you have two choices. You can either toss them out or puree them in a blender. I like to puree mine and add the puree back into the broth. It adds nutrients and fiber to the broth, and it's not noticeable once it's mixed into soup like Tortilla Soup.

With the cooked chicken–I let it cool and then freeze it for future use. I tend to use it for Tortilla Soup, Chicken Soup, in quesadillas or enchiladas, or just on top of a salad. If you're not using the chicken or broth right away, you can freeze it in smaller portions for use later.

I use chicken thighs because I can get them on sale for .98/lb, but any kind of chicken can work. I've also used the whole carcass after we've roasted a chicken or eaten a rotisserie one, but I prefer cooking the thighs with meat so that I get several meals' worth of cooked meat as well. I'm also very loose with the veggies; it's a great opportunity to use past-their-prime carrots and celery. If I have some celery that's gone limp, I can throw it in for the broth.