Card games have a special place in my heart, as they're easy to pack for traveling! We took this game, Rat a Tat Cat, with us to visit cousins over the summer. They quickly fell in love with it, too, from age 5 to age 16, plus the adults. Rat a Tat Cat is easy to learn, but you can try a different strategy each time so it plays differently each time. There's an element of stick-it-to-your-opponent in this game, which some kids have a hard time with, but quick-play games make it easy for you to play many times to make it fair for all the kids involved. 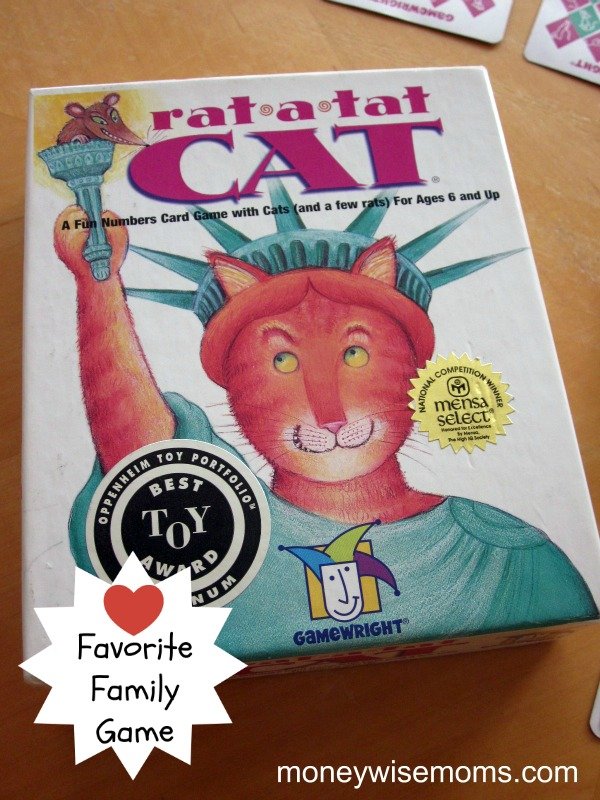 Each player is dealt four cards that lay face-down in front of them for the entire game. At the beginning, you get one quick peek at the two edge cards, and you try to remember them. The goal is to get the lowest score, so you either draw a card, pick up the discard, or steal from an opponent (with a special action card) to replace your high number cards with low numbers. As with other memory games, often the youngest kids remember their numbers better than the adults, which is an advantage for them. 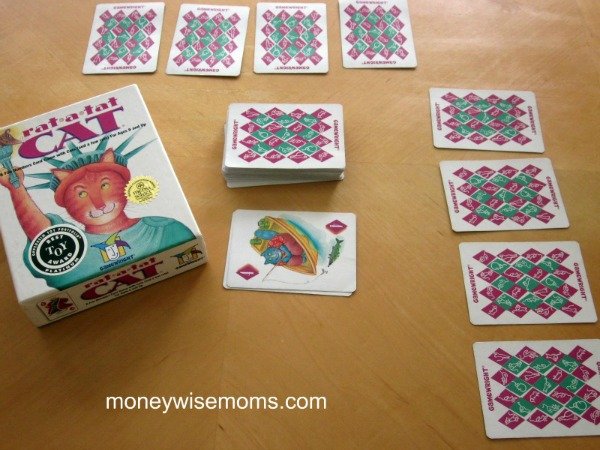 When you think you've got the lowest cards, you knock on the table and say, “Rat a Tat Cat.” Everyone gets one more turn and then you flip the cards over and add your score. My little ones have learned a lot of addition skills from this part of the game. Multiple rounds gives you the opportunity to even things out, and since it's a quick play at around 20 minutes, it works for young kids as well as school-aged. The box suggests the game for ages 6+, but my girls learned to play when they were 4 1/2; as long as your child can read the numbers and sit through the game, they can play. The instructions also include a variation for younger players, keeping the two outside cards face up during the game.

Rat a Tat Cat is one of our favorite family games, and it's easy enough for the kids to teach to friends who come over or any adult who's visiting. Give it a try!


Disclosure: This post contains an Amazon link, since it's easy to buy board games there. You may also find Rat a Tat Cat at a local independent toy store.