The Walters Art Museum in Baltimore {Day Trip from DC}

I'm always on the lookout for frugal fun for my family. Last weekend, we took the kids to The Walters Art Museum in Baltimore last weekend. It should have been a one-hour trip, but we had to stop twice for an almost-carsick child (thankfully nothing happened). The Walters has FREE admission, and while there was metered parking along the streets, we couldn't find any, so we paid $6 for the lot across the street from the museum.

We used the museum's printed scavenger hunt to track down the hidden spiral staircase, which took us to The Knight's Hall and more exhibits in the Medieval Art section, which was my son's favorite. There was even a boy's size suit of armor!

My children are 4, 4 and 7, and this was a good age for them to visit an art museum. The younger ones identified animals and other familiar images among the sculptures, paintings, and artifacts, while my son (age 7) was able to recognize the different mediums from his experiences at school. He was especially fascinated by the pottery since he's done some himself. 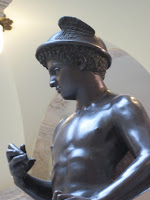 He also found familiar images–when he saw this statue of Hermes, he said, “His hat has the symbol of The Flash!” All three kids found the Egyptian art to be interesting, though my girls were a little afraid of the one large mummy they had out.

The kids' favorite part may have been in the basement. We found shelves of artifacts to touch and observe, a reading corner, a costume area, and a puppet theater. Best of all (according to the kids) was the Family Art Studio. They used paint, glitter, beads, and more to create snow portraits in the style of famous paintings. They loved this open-ended activity, and they could have spent all afternoon in there!

We didn't make it to all of the rooms of the museums; we probably saw half before the kids' stamina ran out. It was a great introduction, though, and now they're excited to visit more museums so we're planning another trip for mid-January, probably to something downtown DC. As for getting around The Walters, there were plenty of parents there with strollers, and while there was an overpriced cafe, it would be easy to bring your own snacks and drinks for an afternoon break. We did make a donation in the collection box at the front entrance–you want to help keep these places open for FREE.

Disclosure: I have no connection to The Walters Art Museum, I just think it's a great FREE place to take kids!

[...] to other museums we’ve visited (like the Walters in Baltimore and the Delaware Art Museum), the National Gallery seemed very old fashioned. [...]

[...] In the meantime, see my posts on the National Aquarium in DC,  National Building Museum, and the Walters Art Museum. Filed Under: Frugal Fun, Kids, [...]

Gina loves food, family and frugal living. She lives in Northern Virginia with her husband, three teens, and new “baby,” dog Sheba. She also works with professional bloggers to scale their businesses and earn more at Connect & Learn Blogging Community. Reach her at gina@moneywisemoms.com.